Erin Jade Lange, answers a few questions for us today about her amazing book,
Butter. But before we get to that, I do have a couple of links to share...

For teachers and book discussion leaders, here's my Michigan Reading Association handout, with links to book discussion guides for nineteen 2012 YA titles. And with this video,Young Adult Books Central is hoping to get a YABC bookmobile to bring YA swag to book events throughout the country! Also to YA Fusion's own Katie McGarry, congrats on her RITA finals in the YA Romance and Best First Book categories!!!!﻿ 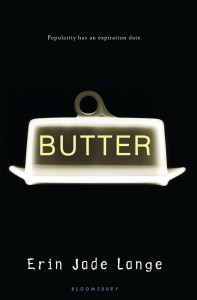 A boy everyone calls “Butter” is about to make Scottsdale High history. He’s going to eat himself to death live on the Internet – and everyone will watch.
He announces his deadly plan to an army of peers and expects pity, insults or even indifference. Instead, he finds morbid encouragement.
When that encouragement tips the scales into popularity, Butter has a reason to live. But if he doesn’t go through with his plan, he’ll lose everything.

And now, the interview you've been waiting for!

What inspired you to write Butter?

Butter was inspired by my work as a TV news producer. We are constantly covering stories of childhood obesity, Internet bullying and teen suicide. Those stories collected in the back of my mind until they formed this character, and once he popped into my head, I couldn't get him down on paper fast enough!


Besides your main character, who is your favorite character in Butter and why?
This may surprise people who have read the book, because he is one of the "bad guys," but my favorite character is Parker. He is more than a bystander, but I don't think he realizes he is a bully. He's just a guy having a good time who doesn't grasp the full scope of what's happening or how he is making it worse. Parker is one of the characters I imagine would grow up, look back on the events in the story, and feel terrible about them. We all make mistakes. It doesn't make us bad people for life.
Do you have a favorite scene in Butter?
Yes, but it's a spoiler scene, so I can't mention it! I'll just say it's the scene with Anna on page 236. ;)
Did you always know how Butter would end, or did it change as you wrote it?
The very first ending I wrote was more epilogue than ending. I always knew whether Butter was going to go through with his plan to eat himself to death live on the Internet, but in early drafts, I didn't deal with the fallout from that decision.
Is there anything you can tell us about how your cover was designed?
One thing people may not realize at first glance is that the image on the cover is more than a butter dish. It's an x-ray of a butter dish. It's a visual metaphor for how the character of Butter exposes himself (and makes himself vulnerable to criticism/bullying) by announcing his deadly plan online for everyone to see.
What’s next for you?
My second book, DEAD ENDS, comes out in September. It's about a bully and a boy with Down syndrome... and how an atlas full of riddles and a search for a missing father leads them to form an unlikely alliance.
Posted by Tracy Bilen at 6:23 PM

This is a sad topic, but the book sounds very compelling and timely. The insight on the cover is great. Thanks for sharing!

I hadn't heard about this book. I agree with Beth that it's a sad topic but a timely one. Thanks for the great interview.

What an interesting premise. Makes you want to know what he'll do.

Thanks for the interview, Tracy. 'Butter' go on my TBR pile.