“Your manuscript starts in the wrong place.”
“This first chapter is nothing but backstory.”

Have you ever received this feedback about your work? Did it leave you confused and wondering what the critique meant? I think I found a way to help you understand. This will involve a five dollar investment (matinee cost) or you can wait a couple of months and visit Red Box. Either way, the movie you want to see is Man of Steel.

Okay, I know. Superman has a great body. Fine. For those of you who can’t see past that, you may have to plunk down another five dollars. The second time, watch the audience. The problem? The first hour is backstory. Literally. Backstory. (Backstory is what happens to a character before the imminent story begins. It’s what shapes him/her. Like the story of the destruction of the Planet Krypton and why Superman had to be sent away, followed by the story of his life growing up on Earth.)

So why is this a problem, you ask? It’s necessary to have this insight into a character’s background, right?

Yes, it is. Especially for the writer. But for the reader, backstory holds no tension, no conflict. (Just for the record, most prologues are really backstory.) In huge amounts, backstory creates a pace that is S…L…O…W.  And what happens when the pace is slow? In the movie, the audience fidgeted; there were huge high-in-the air stretches. They fell asleep. They were bored.

You see, this movie audience bought tickets with the expectation of seeing  some epic battle to save Earth, and for the first hour, almost half of the movie, there’s not so much as a hint of this grand theme.  The action that everyone paid for didn’t show up till the last half of the movie.

But it’s in there, you say. In my book. If they just read far enough they’ll get to it.

Alas my friend, this may not have been a fatal flaw for the Man of Steel. But for you as a writer? Think about it. You are asking your reader to sit for more than the typical movie time of two to two and half hours. You are asking your reader to invest five to ten hours. And that time is not spent in an enclosed, darkened room with nothing else to do but watch/read, but is spent in a life filled with distractions like homework, meals, TV, friends, computers, etc. all competing for your precious audience’s time. So when your reader gets bored, what happens to your book? Let’s just say there’s no extra-large tub of popcorn to hold your reader in the seat until ‘the good stuff’ shows up.

Your reader buys your book with the expectation of being enthralled by your words, your story. They want a snapshot of ‘the good stuff’ from page one and expect it to build from there. In Average Town, USA, there are typically no more than twenty movies showing at any one time. Not so with books. At each and every moment there are thousands of books available at bookstores and online. The competition is fierce. If you don’t provide what they want (including agents/editors) someone else will.

That means you have to start with the inciting incident – where the good stuff starts. (And just for the record, a threat made twenty some odd years ago is not an inciting incident. The threat has to be immediate.) The backstory comes in tiny bits and pieces sprinkled throughout the work.

And that’s a story for another day.

/LoveHateAngerDevotion - AKA That Thing Called Emotion


The success of a book has a lot of contributing factors. A killer plot. Enticing characters. Cool settings. Unique idea… But one factor, in my opinion, anyway, stands out above the rest.

Anger, joy, sadness, hate—emotions are a large part of what makes people read. At least, that’s the case with me. I want to pick up a book and feel something. I want to fall in love. Be angry when the hero and heroine are thwarted. I want to Snoopy Dance when the bad get gets his due. Who wants to finish a story where you can’t connect with the characters? If I don’t feel some kind of emotion, it’s all over.

Apathy is the death of a book.

No truer words have ever been spoken. When the reader isn’t emotionally invested in what happens to the characters, the whole thing becomes pointless. How many times have you put down a book because you just don’t care? It's okay. We've all done it. I’m not just talking about love here, either. Hate is just as good, and sometimes, more powerful. When you're emotionally invested in a book, and you come across an uber-baddie, don't you worry what devious plot he has in store for the hero and heroine? Don’t you find yourself imagining ways to pick him off?

This is a huge part of why I write in the young adult genre. The emotions are amped. Everything from a character's first love and heartbreak, to their struggle to find themselves in the world. So many firsts. So many passionate emotions. SO MANY FEELS!

And that's why we read. To feel. To connect. As long as readers feeling something, then I’ve done my job. From cheering your favorites on as they pursue their quest, to screaming in frustration when the bad guy gains the upper hand. A handful of tissues, or the urge to yell at the page. If you walk away feeling, then I’m a happy puppy.

What about you guys? Is there a particular book or fictional character that has evoked a strong emotion?
Posted by Jus Accardo at 11:44 AM 4 comments:

Interview with our own newly sold Colette Ballard!


Today I have the great privilege of being the first blogger to interview the amazing Colette Ballard about her recently sold book, Middle of Nowhere. Before I begin, let me tell you a little about Colette. First, she is amazing and tenacious. She tells her story below, so I won't go into that, but she made it through close calls, and almost-theres and came out on the other side. Second, she's really funny. Really really funny. Third, she's talented, and soon everyone is going to get to see proof of that!

Colette Ballard's debut MIDDLE OF NOWHERE, when a seventeen-year-old girl is brutally attacked by her controlling boyfriend, she accidentally kills him in self-defense and with the help of her closest friends eludes police until she can find evidence to clear her name and face the boy who has stood by her for years and who she has loved for as long as she can remember, to Marie Romero at Tulip, by Kevan Lyon at Marsal Lyon Literary Agency (World English).

Four score and seven years ago…

Okay, maybe not that long, but it feels like it, I started researching and learning how to write picture books. I bought a couple of HOW TO books—Writer’s Digest Children’s Writers and Illustrators Market Guide is a must-have. After ruining lots of paper, and more research, I found contests to enter and focused on the ones where you’d get written critiques.

Somewhere along the road…

I had a dream; so intense and vivid I couldn’t stop thinking about it. I found myself creating a story around it and imagining it as a novel—even though I had zero knowledge of novel writing, but had secretly daydreamed of the idea for years.

I allowed myself to write down my ideas but didn’t take it any further. I was in the process of polishing one of my children’s book manuscripts for the 2008 PNWA contest when I noticed the young adult category. Six weeks later, I had the first thirty pages and a synopsis ready for entry.

To my utter shock and joy, I received a phone call that I was one of eight finalists. I didn’t win, but this achievement and the two rave critiques from established writers gave me the courage to finish the manuscript.

After more contest critiques (not all favorable by any means) and a few honorable mentions in The Writer’s Digest short story contest, I gained enough confidence to venture out of my solitary writing cave and join the SCBWI. I’d read about the importance of joining a critique group and three and a half years ago, I worked up the nerve to answer a life-altering e-mail from Katie McGarry looking to start a YA critique group in the Louisville area. I responded along with Bill Wolfe, Bethany Griffin, Kurt Hampe, and eventually we added Kelly Creagh. I cannot stress the importance of this decision—I would NOT be where I am without these people!

After maybe a year and a half…

And a major overhaul of the manuscript, it was time to send out agent queries…I attended an SCBWI conference and signed up for an anonymous query critique session with agent Kelly Sonnack. She really liked my query letter so I contacted her after the conference and stayed in touch until I completed the manuscript. She ended up rejecting it because it simply wasn't her thing, but she referred me to the amazing Kevan Lyon who snapped it up. BTW, Kevan happened to be Katie’s agent as well—crazy, right?

Kevan sent MON out on submission and we had some very close calls—three times going to acquisitions—inevitably resulting in a “NO”. Heartbreaking to be so close!

Little did I know that Kevan had an intern named Marie Romero who read MIDDLE OF NOWHERE and requested to take it on as a project when she moved up as editor-in-chief at Spencer Hill Press’s newest line, TULIP ROMANCE.

MIDDLE OF NOWHERE is scheduled for digital release November 25th, 2013!! Print release to follow at a later date…

This all happened within three days and the book wasn’t even out on submission—I was in complete shock and sat staring at the computer screen for a reaaallllyy long time. J
Oh, and super fun fact: I got the news of my book deal exactly five years to the weekend that I got the phone call about finaling in my first contest for Middle of Nowhere!

The inspiration for the book came from a crazy dream—described in the non-short summary in question one. J

Thanks Bethany, for my very first interview!!

Winner! Of the ARC of All the Truth That's in Me


Thanks to everyone who stopped by YA Fusion to enter the ARC giveaway of Julie Berry's YA novel, All the Truth That's in Me.  I also appreciated all the kind words of support on my agent news. 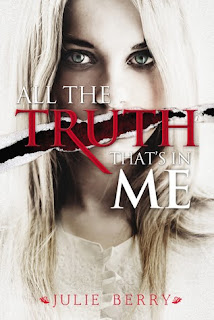 And the winner is...

Tiffany has a great blog you should check out, too: http://bookcoverjustice.blogspot.com/

I hope everyone is having a fun and safe holiday weekend.