As a high school teacher, there's nothing I enjoy more about the summer than binge reading. So in honor of summer, today I have a little suggested reading to make your summer sparkle! But before we dive into those great books, a few announcements... First, I'm super excited to announce that the cover reveal for my upcoming release, WATCH YOUR BACK, will be next Monday, June 23 (think thrills and chills!). BLOGGERS, we'd love to have you help out by sharing the cover - just e-mail editor@tulipromance.com.   I hope you'll check out my website Monday for the cover reveal, but meanwhile you can already add WATCH YOUR BACK on Goodreads here.

And now for your binge reading! Here are a few titles that I enjoyed to get you started...and please use the comments section to add your some of your own suggestions. Happy reading!

A REALLY AWESOME MESS by Trish Cook and Brendan Halpin 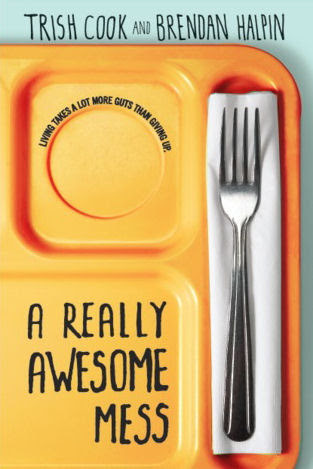 Two teenagers. Two very bumpy roads taken that lead to Heartland Academy.
Justin was just having fun, but when his dad walked in on him with a girl in a very compromising position, Justin's summer took a quick turn for the worse. His parents' divorce put Justin on rocky mental ground, and after a handful of Tylenol lands him in the hospital, he has really hit rock bottom.

Emmy never felt like part of her family. She was adopted from China. Her parents and sister tower over her and look like they came out of a Ralph Lauren catalog-- and Emmy definitely doesn't. After a scandalous photo of Emmy leads to vicious rumors around school, she threatens the boy who started it all on Facebook.

Justin and Emmy arrive at Heartland Academy, a reform school that will force them to deal with their issues, damaged souls with little patience for authority. But along the way they will find a ragtag group of teens who are just as broken, stubborn, and full of sarcasm as themselves. In the end, they might even call each other friends.
(Synopsis from Goodreads) 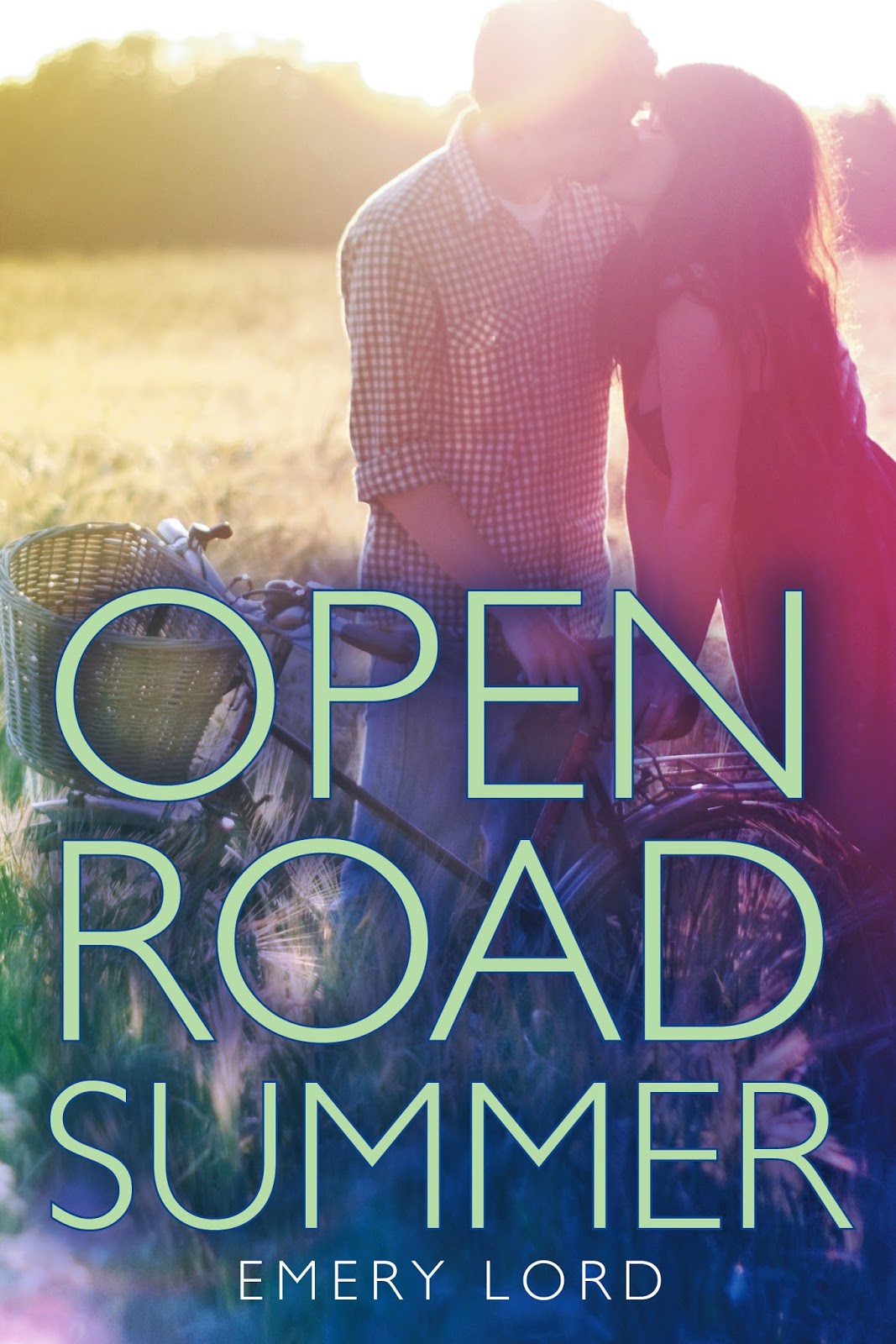 After breaking up with her bad-news boyfriend, Reagan O’Neill is ready to leave her rebellious ways behind. . . and her best friend, country superstar Lilah Montgomery, is nursing a broken heart of her own. Fortunately, Lilah’s 24-city tour is about to kick off, offering a perfect opportunity for a girls-only summer of break-up ballads and healing hearts. But when Matt Finch joins the tour as its opening act, his boy-next-door charm proves difficult for Reagan to resist, despite her vow to live a drama-free existence. This summer, Reagan and Lilah will navigate the ups and downs of fame and friendship as they come to see that giving your heart to the right person is always a risk worth taking. A fresh new voice in contemporary romance, Emery Lord’s gorgeous writing hits all the right notes.
(Synopsis from Goodreads)

Dragged on a family trip to Europe’s ancient cities, Becca wants nothing more than to go home. Trapped with her emotionally distant father, over-eager stepmother, and a brother who only wants to hook up with European hotties, Becca is miserable. That is until she meets Nikolai, a guy as mysterious as he is handsome. And she unknowingly finds herself with a runaway prince.

Nikolai has everything a guy could ask for-he's crown prince, heir to the throne, and girls adore him. But the one thing he doesn't have...is freedom. Staging a coup, he flees his kingdom and goes undercover on his own European tour.

When Nikolai and Becca meet, it’s their differences that draw them together. Sparks fly as they share a whirlwind of adventures, all the while dodging his royal guard. But Becca's family vacation ends in a matter of days. Will Nikolai and Becca be forced to say goodbye forever, will his destiny catch up to him, or will they change history forever?
(Synopsis from Goodreads)

ANYTHING TO HAVE YOU by Paige Harbison 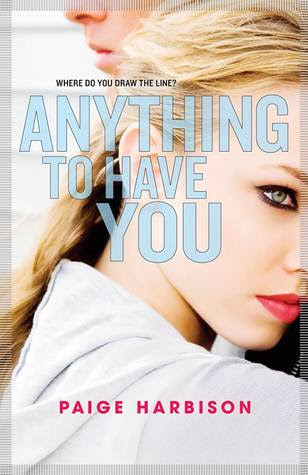 Nothing should come between best friends, not even boys. ESPECIALLY not boys.

Natalie and Brooke have had each other's backs forever. Natalie is the quiet one, college bound and happy to stay home and watch old movies. Brooke is the movie—the life of every party, the girl everyone wants to be.

Then it happens—one crazy night that Natalie can't remember and Brooke's boyfriend, Aiden, can't forget. Suddenly there's a question mark in Natalie and Brooke's friendship that tests everything they thought they knew about each other and has both girls discovering what true friendship really means.
(Synopsis from Goodreads)﻿
Posted by Tracy Bilen at 12:56 AM 5 comments:


This Blog Hop is a blog tour showcasing authors and their writing process. I was tagged by Kurt Hampe, one of our witty, hard-working YA Fusion blog team members whose posts always crack me up. You can read his post and back-track through the blog tour here: http://www.kurthampe.com/1/post/2014/06/blog-hop-my-writing-process.html

I'm tagging Vicky Lorencen and Katie Van Ark who've inspired me for years through SCBWI-MI.  You can learn more about them at the end of my post.

1. What am I working on now?
So many different projects.  My agent recently submitted my new YA novel, and we received fairly consistent feedback from a few editors, which means I need to revise before we resubmit.  I also have another YA novel to revise and a half-completed New Adult novel to finish. In between novels, I write short pieces, such as an essay about working in Detroit that was recently accepted by an online literary journal.  I also write for Gleaners Food Bank in Detroit which has been a really nice way to blend my social work career with writing.  My other writing role is co-editing the SCBWI-MI newsletter.  I'm always on the lookout for interesting kidlit articles and artwork.

2. How does my work differ from others in its genre?
This is a tough question - there's a stunning amount of talent and variety in YA fiction. Working as a social worker has been eye-opening, and I've been inspired by so many resilient children and families.  I try to bring this experience and emotion into my stories.

3. Why do I write what I do?
I want my novels to be fast-paced and engrossing, but also tackle big questions. To make readers feel and think deeply. I write to better understand our world, and I hope to expand a reader's worldview as well.

4. How does my writing process work?
I keep notebooks beside my bed, in my office, and in the car.  I jot down character traits, plot ideas, themes, questions, snippets of dialogue.  It all stews in my subconscious and begins to take the shape of a story.  I might write a very rough outline, but usually I just need to dive right into the story and figure it out as I go.

If I'm stuck I'll share chapters with critique partners, but I prefer waiting until I have a complete first draft.  My agent provides valuable feedback too.  Then, it's revise, revise, revise.  Last year, I took an online writing course with author Tim Wynne Jones where I could submit up to 300 pages.  His feedback was so helpful, and the deadlines kept me moving forward.

So, enough about me. Check out writers extraordinaire Katie Van Ark on Saturday, June 14th, and Vicky Lorencen on Monday, June 16th, to learn more about their writing process.  Here are their bios and blog links:

Vicky Lorencen makes sentences and shops for shoes in Michigan. She recently completed her second middle grade novel SHORT CHANGED and is actively shopping for a literary agent who will be just the right fit.  Visit her blog, Frog on a Dime at http://vickylorencen.com/posts/

Have a great week!
Kristin Lenz


Do you know anyone who is perfect?  Every hair in perfect place? Their personality always forever shining? They know every right answer? Know the perfect thing to say even during those tough times?

I have a feeling some of you might be rolling your eyes and answering “Yes” because you are thinking of the person who acts like they are perfect, but, in the end, you know that person is not.

One of my pet peeves when reading is the perfect character. Every character in the book loves them. They are beautiful and intelligent and make every right decision and say every perfect thing and they are nothing less than God. This is also very unrealistic.

We are human, which means, we all make mistakes and have quirks that make us individuals.

When I write, I give every single character I write, even the secondary characters, a fatal flaw. That one thing about them that hurts not only themselves, but also has the potential to hurt the people surrounding them.

Yes, I can write a book where I give the character a problem and then the entire book follows their journey as they try to solve the problem, but what I believe makes a character worth reading is when we see them hurt.

Not only do we give the character a problem—for instance with Noah in Pushing the Limits, he wants custody of his brothers. I also gave him a fatal flaw—his inability to trust.

As we watch Noah try to solve his problem, we are also rooting for him to work past his fatal flaw. As readers, most of us have not had to fight for custody of our siblings, but odds are most of us have found trusting someone else to be difficult.

Fatal flaws in characters make them believable and they make them relatable.

One day my daughter came home upset with a bad test grade. She’s a great student, but was struggling with a new concept at school. I sat her down, wiped her tears away, and explained that all I ask of her is to try her best. I’m not interested in having a perfect child. Perfect people, in my opinion, are boring.

If everyone was perfect, we would be nothing more than cookie cutters of each other. That doesn’t sound interesting to me. We have all been made as individuals. We are wired differently from each other. We have strengths so we can help others and we have flaws so that we learn how to ask others for help. We are each beautifully flawed so why not write your characters with a few flaws of their own?