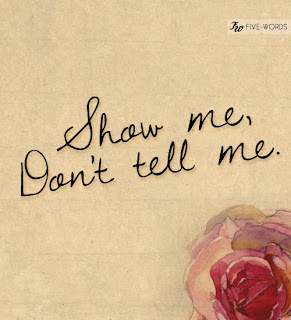 From Wikipedia Show, don't tell is a technique often employed by writers to enable the reader to experience the story through action, words, thoughts, senses, and feelings rather than through the author's exposition, summarization, and description. The goal is not to drown the reader in heavy-handed adjectives, but rather to allow readers to experience the author's ideas by interpreting significant, well-chosen textual details.

I'm going to go out on a limb here, and assume that the readers of this blog are savvy enough to understand this technique and apply it to their own writing. In fact, showing is so ingrained in us, I suspect it's the reason we all agree that synopsis writing is torture sent from the depths of hell. When we write a synopsis we are telling telling telling, slip a little showing in, nope, no room here for that. When I write a synopsis I always imagine I'm in that drive-in scene in Dude Where's My Car where they try to order Chinese food. And then this happens. And then this happens. And then more things happen. And then something explodes. And then, and then, and then...we would never write a story like that.


But I don't think there is any time in your writing (except maybe the frantic heat of an inspired first draft) that's the wrong time to re-evaluate our understanding of this writing rule and it's use in our writing. 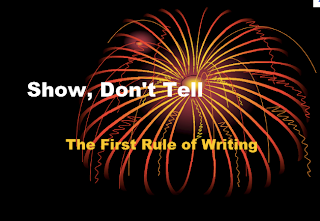 We all know the difference as readers. And as writers, sometimes we choose to tell things for brevity or to move a story along (and sometimes we get called out on it and have to change it).

Working with beginning (high school freshman) creative writers has helped me break showing and telling down to its rather confusing core.
Me- okay your character is depressed. Show me...
Student- (writing furiously) the character keeps their head bowed all the time.
Me- yes, that's the right direction (physical and physiological descriptions are great for showing)
Student- but I'm still telling...I'm telling you that the character keeps their head bowed all the time.
Me- okay, but don't necessarily tell it to me. Show it to me in a scene. All the while thinking, the line, [character's name] never raised his head or looked anyone in the eyes- is a great line. Regardless of the fact that it is telling you something (while showing you something).
Student- but I'll still be telling their mannerisms, to show you how they are slouching and also show you their state of mind...
Me- yes but... yes but..wow...I see what you mean. Can someone fetch me something with caffeine?

The scene above is completely fictional, in that my creative writing students never question me that directly, I have book covers posted on the wall, for goodness sake. I'm obviously an expert. (big smiley here). I pieced together that scene by working with a very analytical student and watching the wheels in their brain work. And yes, it comes back to what I just said. (You're always telling something. It comes down to what you're trying to show by telling it to me...)

Here's the thing, though. Except for that isolated case when you think I'm just going to tell this, to keep the story moving along -- which happened to me recently, I was working on my short, GLITTER AND DOOM, which occurs between MASQUE OF THE RED DEATH and DANCE OF THE RED DEATH, and I was already well over the 10k expected word count, so I got to a scene and it basically went... And then they escaped. It seemed like a good idea, but when I read back over it, I had to flesh out the scene. When to we ever think, I'm just going to tell the reader what happened at this point in the story and then move on? 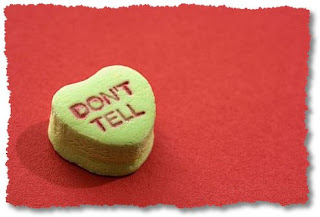 But, sometimes, in revisions, my editor tells me to show something, and I know how those freshman students feel. I find myself at a complete loss. How do I show this? Why isn't it obvious?

Here are some examples from Dance...“Good morning.” It’s Will, and I’m thrown into confusion . Everything has changed, and nothing.  (The comment on this line was, show don't tell). I did modify the line to show her confusion.

Here's an Elliott line from earlier in the story.

the surprise on Elliott’s face would be comical, if his cheek wasn’t covered in blood.
“Everyone get back to the airship,” Kent calls. “It just grazed him.”
Elliott raises his sleeve to his face, now he looks deeply angry.
I really like this scene, because I enjoy using understatement with Elliott. I like that he's just been shot (grazed, as Kent says) and now he's pissed off. But I got the dreaded show don't tell comment on this line, too. And Elliott's eyes ended up blazing. Which is fine (and probably more visual--Elliott is sort of prone to blazing. Particularly his eyes).

I'm a pretty obsessive reviser, and I wouldn't have changed either of those lines without prompting. They said what I wanted to say, and I lost sight of showing...which is fine, but if you do it too much, it's obviously a problem.

How do I translate this concept that seems so simple, but occasionally baffles, stumps and infuriates me to students?

To make my life as a teacher easier, I've stopped using the terms show vs. tell. Instead, we focus on STORYTELLING. Obviously, the and then story, and then the boy walks down the street. And then he see's what he thinks is a quarter in the road. And then he picks it up. And then he realizes it's a magical talisman that will give him three wishes...(in all fairness, out of 2 intro to creative writing classes and 50 students, only about 3 would write a story that way, but telling those 3 to show me what's happening doesn't help them...if they knew how to do it, they would...)

Here's what I do instead. Hopefully it will be helpful to people, whether in their own writing when they hit that--how do I show THIS scene--stage, or helping a beginning writer (omg, don't get me started on my 4th grader's storytelling) or something. We break it down to a mix of the following elements.

Obviously some of these overlap, and should. In analyzing stories, we typically highlight plot, setting, and interior dialogue. We underline characterization and circle action details. Dialogue we do not mark, because it should be easy to spot (but don't get me started on their stubborn refusal to believe that each speaker gets a new paragraph. Apparently blocks of text are very appealing to some thirteen and fourteen year old individuals...) We do, sometimes, analyze our dialogue to see if it is forwarding plot or characterization, or both, but we don't mark it, which is good because due to school budgetary concerns I only have so many highlighters. :D

We mix these elements together on our paper. Sometimes we come up with a sort of stew, where the different elements are separate, though connected in the same scene. Sometimes it's more of a puree, where you can see the scene, but it's all blended together. Both can be quite effective, and I can tell you that not writing or saying the phrase, Show, don't tell, over and over, has improved my disposition greatly. I was worried I was just going to have to get some sort of recording device and play a sound byte of me parroting the words over and over.

In closing, let me say that I have been blessed with my creative writing students. The talent in my classroom this year is tremendous (they are MUCH better than I dreamed of being as a freshman in high school). I count myself lucky to be able to teach them. AND neither of my creative classes happens during the lunch period. After a comment years ago likening motivation to the carrot dangling in front of a rabbit, I came back from lunch for TWO YEARS to find my desk covered with packets of carrots. And that (and the health insurance) is why I keep my day job.

Posted by bethany griffin at 12:05 PM

I've also gotten stuck in my head about what is telling vs. showing. I think in a first draft, getting the story down is key. But the second, third, fourth etc. times to go through the story are when those tells should be fleshed out. I had a chapter I was working on that I hated. I realized it was all a wrap up to get loose ends tied up before I finished the story. Boring! I needed to turn those into a few scenes and decide how to show the loose ends tying up rather than have the character explain it. It seems so obvious to admit this, but it's tough to weed those out in a whole manuscript.

I imagine teaching creative writing is a great reminder of all the elements you have to be aware of while writing and editing.

At first, show don't tell doesn't seem that hard. We unsderstand the basics, the why. But then , as you pull the elements apart, it starts to get more complicated. Between body language, thoughts, sensory description, dialogue, emotion, motivation symbolism, and physical detail...suddenly the balancing act of show, don't tell is a lot harder than it seemed. So glad you are helping your students through it!

Show-don't-tell drives me crazy! I'm taking a writing class now and my mentor has been helpful in pointing out when an event should be shown in a scene as opposed to when something can be summarized (told). Back-story is especially tricky.

In theory showing sounds so obvious, but I still catch myself telling when I think I'm showing. *rolls eyes*

And I totally get the school example. My brain thinks that way most of time. :)

I think there are some fine exceptions to Show Don't Tell. The "once upon a time" style of opening is pretty telling, yet it can be a charming way of drawing the reader in. The Hobbit starts that way, as does The Phantom Tollbooth.